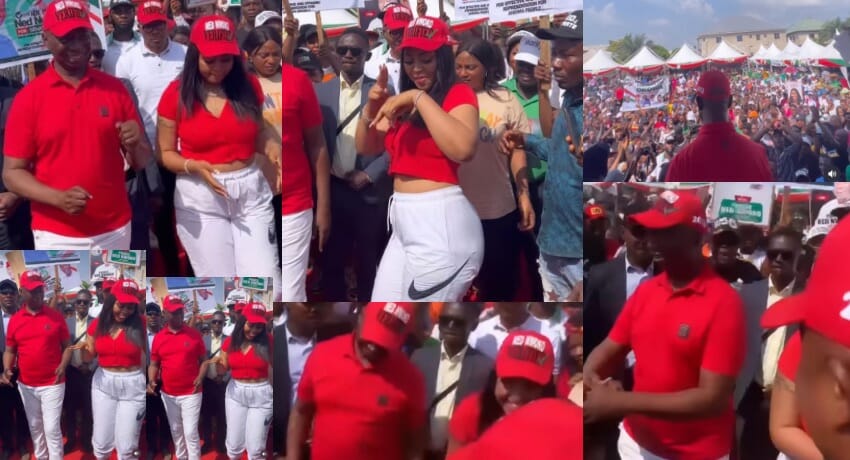 Actress Regina Daniels and her billionaire husband, Ned Nwoko have thrilled Delta people with their dance moves at the latter’s political campaign in the state.

The 61-year-old and his wife have been on a ward-to-ward campaign to sell his candidacy to the people.

In a video posted by Regina Daniels on Instagram, showcasing highlights of the campaign, Regina and Nwoko could be seen dancing to Kizz Daniel’s hit song ‘Buga’.

READ ALSO  ‘My Angel, I Will Miss You Forever,’ Skales Announces Death Of His Mother

The one minute clip also showed the senator doing the signature ‘Buga’ pose with smiles on his face.

The song has become the toast of many since its release this year. Such was the popularity of the song that it took Kizz Daniel to the FIFA 2022 World Cup in Qatar to perform it.

Captioning the video, the actress noted that campaigning with her husband has been a beautiful experience. She wrote:

“I must confess it’s been a beautiful experience with our ongoing ward.”

In an Instagram post on November 20, an excited Regina who had been on the campaign trip before taking a break announced that Nwoko gave her 10 million naira as a reward for joining him to campaign for votes.

“Going from ward to ward, campaigning, hungry and tired. I received this alert from hubby my tiredness disappeared even with this hot sun. Thank you baby.”

the 22-year-old wrote as she shared a screenshot of the alert she received.

Ned Nwoko is hoping to return to the National Assembly after representing Aniocha/Oshimili Federal Constituency in the House of Representatives from 1999 to 2003.

VIDEO: “Una no sabi sing o” – Portable calls out BNXN and Ruger, offers to teach them