Nollywood actor, Ayo Olaiya has left tongues waggling as he gushes over his mystery lover.

The actor wowed his fans as he penned a romantic message to his woman which he posted yet cropped off her face.

Sharing a photo of him and his woman, with her face hidden, the Yoruba actor gushed over her.

Ayo Olaiya described his mystery lover as an Angel who has lightened his world and completed his heart.

Pouring sweet words on her, he further described her as the best things that has happened to him.

He expressed how grateful he is knowing he has Angel beside him.

“Because you are the best thing that has ever happened to me, you deserve the best of everything from me.

Because you are an Angel who lights up my world and completes my existence, and deserve the every best.

Because I wake up every morning, grateful of your angelic presence in my life and thanking God for bringing you into my life, you deserve the very best my world best”. 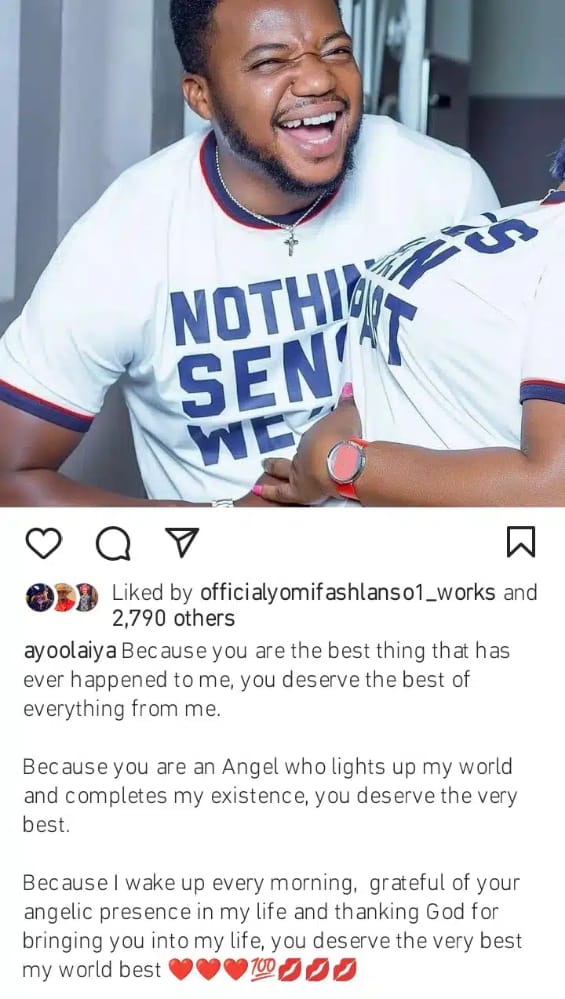 Taking to his comment section, his fans rejoiced with him over his new found love life.

READ ALSO  “Ice on your neck but no food and water in your house” – Dorcas Fapson throws hot shade at ex-lover, Skiibii

However, many questioned why the actor was keeping his woman’s identity away from the public.

One Mobolaji Samuel wrote: “I shall know one day we go see her face

One Princess Ademiproduction wrote: “Ay Ay Ay how many times I called you. Bring out wife face out. Let’s pray bride price

One Mr surebeejay wrote: “Las las the face will be reveal

One Wemixy wrote: “Why u cut her face na wa

We had plans for the new year, this was not one of them – Actor, RMD heartbroken over Sammie Okposo’s death

“I don’t own a car, but my bank account is heavy”- BBN Maria brags, shut down critics