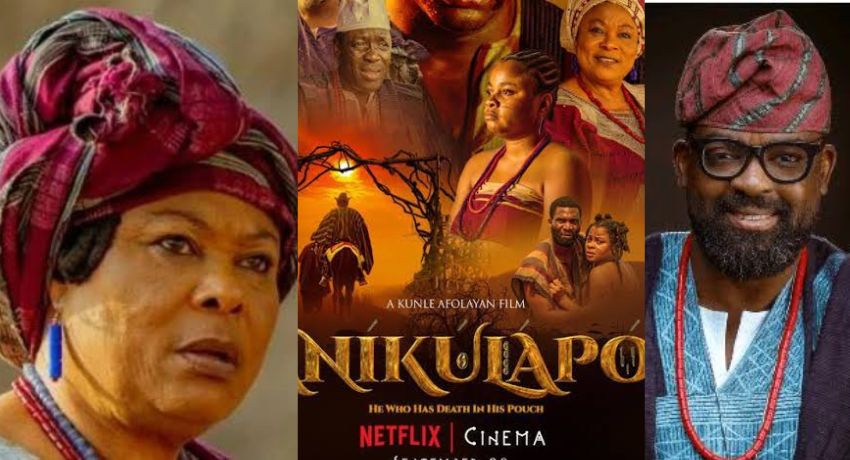 Set in the 17th-century Oyo kingdom and directed by Kunle Afolayan, Anikulapo is the story of Saro, a travelling cloth weaver, who had a relationship with an older woman named Awarun.

Awarun, a businesswoman who runs a ceramics factory, promised to take care of Saro and help him build a business of his own. She also recommended him to the royal family to become the royal clothe weaver.

Things, however, turned sour when Saro got jealous of Awarun’s independence and sexual relationship with another man, prompting him to begin an affair with the Alaafin’s youngest wife Queen Arolake, leading to his death.

A bird brought him back to life, leaving behind a gourd with the power to raise the dead. Arolake who attacked the bird after it had saved Saro, picked the gourd and nursed Saro back to health.

Speaking briefly about her character in an Instagram post on Thursday, Sola who posted behind-the-scenes photos from the movie set, described Awarun as a sugar mummy. She wrote:

Reacting in the comment section of the post, Kunle Afolayan who also played Sola’s loved interest teased her saying:

“Come and Awarunnise me please.”

Speaking further about her character in a video on Youtube, Sola describe Awarun as selfish, beautiful and hardworking. When asked if she believes Awarun helped Saro out of the goodness of her heart, Sola Sobowale said:

“Yes na. Why didn’t she chase him away when she met him sleeping in front of her stores?”

When asked if she believes her character was just intuitive enough to know Saro was up to something sneaky, the 58-year-old said:

“Awarun has been around for a long time, she can read people, she is very intelligent and she knows what she wants so she is always a step ahead of everybody.”

READ ALSO  I have wrecked properties, damaged materials of all sort – Chacha Eke opens up in new video
Related Topics:AnikulapoAnikulapo the movieAwarunCelebritiesKunle AfolayanSola SobowaleSugar Mummy
Up Next