Social media users have reacted to a claim which held that the third baby mama of the popular singer, Davido, Chioma Avril Rowland is expecting a second child.

The report was presented by a controversial gossip IG blog, Insiderhint. It revealed that the mother of one is pregnant and urged netizens to expect ‘OBO second’.

This comes amid several romantic stunts made by Davido and Chioma Rowland lately which has sparked a lot of speculations amongst cybercitizens.

Information reaching me say Chioma don get belle ooo make una dey expect OBO the second ooooo. I repeat Chioma don get belle now am breaking the news just like I said last year October when una dey ask me if dem still dey together and I made a post about it telling you guy’s go leave dem alone they are still together.

Now am breaking the news Chioma don get belle if the news later went viral like that BBN girl own and other bloggers no give me credit help me swear for their mama and papa ooo. 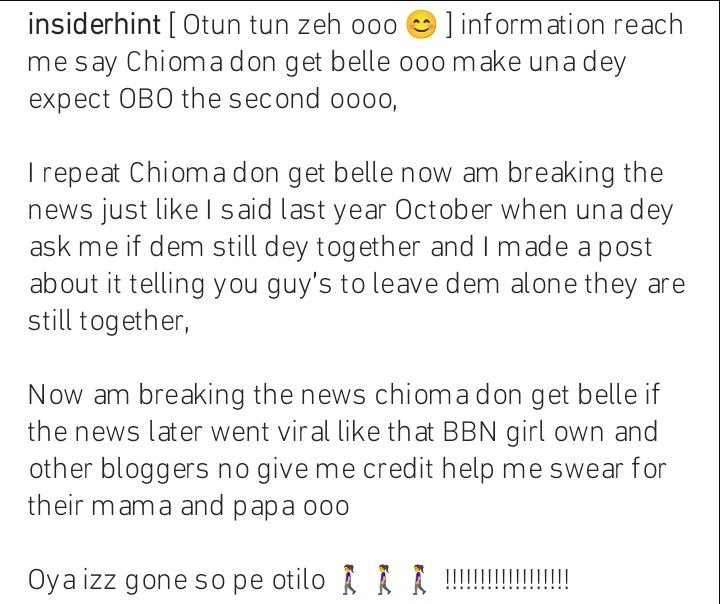 Mixed reactions however trailed the claim while some were happy over the development, others expressed disappointment in Chioma Rowland.

Refer to some remarks beneath:

Tripple wrote: “It’s a good news, congratulations to her.”

Chinwe Asinobi wrote: “She was in a club 2 days ago, if she’s pregnant will she be drinking?”

Helen Gold wrote: “Omo I nor fit talk I weak. Congratulations to dem”.

Chef Amaa wrote: “As an Igbo girl…I am disappointed”

Lahrah Gram wrote: “Wanted this for Sophie tho… congratulations to her”

Florishing Mira wrote, “Chioma no behave like Igbo babe wey she be”