Nigerian comedian, Acapella and media personality, Daddy Freeze have gone back and forth about Nigeria’s achievement in celebration of Independence.

Daddy Freeze had shared a screenshot of a report which revealed that China got 67 billionaires in 2016 alone.

The media personality who stated that the Chinese don’t pray, also claimed that 90% of their population are irreligious.

Daddy Freeze also said that while the Chinese are getting richer, Nigerians wake up every morning to set up “imaginary fire altars of prayer” to pray for destiny helpers. He wrote:

“For those of you saying leadership, not religion, is the cause of our problem, remember that our Vice president is an ordained pastor in RCCG.

“The Chinese don’t pray, up to 90% of Chinese people are irreligious; meaning they have no religion, yet a billionaire in USD is created in China every 5 days.

“In one month China creates more billionaires than Nigeria created in 60 years.

“The Chinese are getting richer while Nigerians wake up every morning to set up imaginary fire altars of prayer and pray for destiny helpers, yet we have only 3 USD billionaires. When will this buf0Onery end?”

Acapella who was in the comment section of the post, told Daddy Freeze to allow people pray if they want to.

He also asked if Daddy Freeze who claims not to be one of those setting up prayer altars, has made billions. Acapella wrote:

“Lolz baba but you wey no dey set up alter normally, how many billion you don make? Intentional government policies is what makes a people rich…

“In Nigeria there’s hardly a legit billionaire bcos of one or two…Allow people pray if they want to…The Chinese also have their beliefs. Selah”

Daddy Freeze who reacted to Acapella’s comment, stated that he never claimed to preach a gospel that creates wealth or billionaires.

READ ALSO  Enjoy your UK trip, let them continue with their pregnancy movie roles – Fan tells May Edochie, she reacts

The media personally who rhetorically asked if things in Nigeria has improved after 60 years of praying, also pointed out that the Vice President of the country is an ordain Redeemed Christian Church of God Pastor. He wrote:

“My dear brother. I never claim to preach a gospel that creates wealth let alone billionaires. I preach the scriptures as they are not as you would want them to be.

“I don’t pray for destiny helpers neither do I claim to be an apostle of prosperity like 90 percent of your pastors. I hearby challenge you to list 10 things our prayers have done for us in this country. I’m waiting.

“Our Vice President is an ordained redeemed pastor, so religion and the government are in bed making love passionately.

“We have been praying for 60 years, in what way has Nigeria improved? We have regressed in every facet of life, from love for one another to insecurity, the economy etc. Yet we still pray and pray.

“We are ‘japaing’ to countries that don’t pray and the more we pray, the more our country resembles H3ll faya.

“5 churches on every street and every single early morning imaginary prayer altars what do we have to show for it? Poverty, lack of love, insecurity?

“So what’s the use of the prayers and early morning imaginary fire altars?
abeg make una help me tag am.~FRZ” 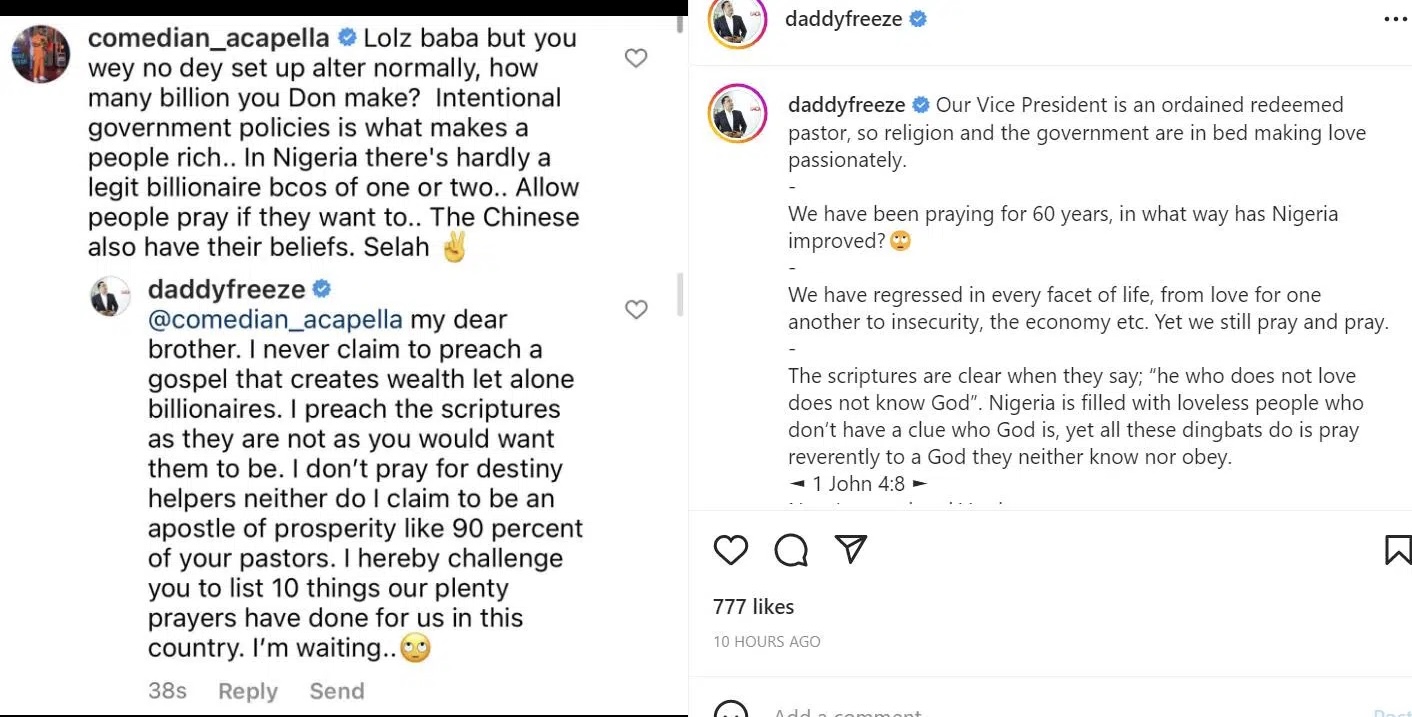 How I received N3.4M from my boyfriend just for cooking for him – Bobrisky