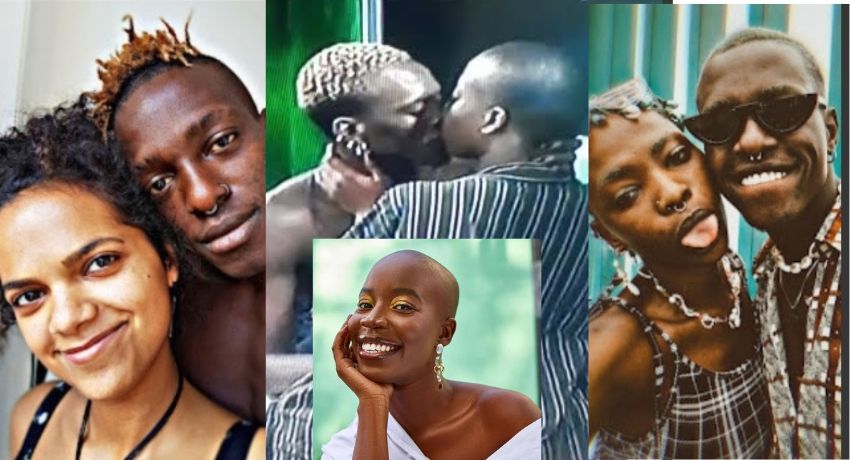 Evicted Big Brother Naija ‘level up’ housemate, ‘Hermes‘ Chibueze Iyele has revealed he’s in love with Allysyn as well as his other two girlfriends.

He revealed this while speaking in a radio interview along with two other evicted housemates, Groovy and Sheggz.

According to the reality star, being in a polyamorous relationship is what he loves and would never be with a lady who would force him to love her exclusively.

He described his relationship as an open one wherein any of his partner can decide to leave when they wish.

Hermes stated that although he hasn’t had the conversation with Allysyn, he nonetheless loves her so much.

Watch him speak below:

Hermes recently revealed that he and his siblings were named after gods.

The performance artiste, during one of his post-eviction interviews, said his father named all four of them after different gods.

He declared ‘Hermes’ is not a stage name but what his father gave him at birth. He said:

“My father named us four after gods. My two brothers are Akhnaton and Kuthumi, while my sister is Isis. Hermes is my real name.”

*Hermes is an Olympian deity in ancient Greek religion and mythology. Hermes is considered the herald of the gods. He is also considered the protector of human heralds, travellers, thieves, merchants, and orators.

He is able to move quickly and freely between the worlds of the mortal and the divine, aided by his winged sandals.
Hermes, according to research plays the role of the psychopomp or “soul guide”, a conductor of souls into the afterlife.

Recall that evicted Big Brother Naija ‘level up’ housemate, Allysyn Audu, recently made her stand known on continuing her romantic relationship with fellow housemate, Hermes, outside the house.

It is also not a secret that Hermes already has two girlfriends outside the Big Brother Naija housemate.

In a recent interview, she said:

“Knowing Hermes had two girlfriends, I respected his dynamic (circumstance) while in the house. However, upon coming out of the house now, I know that I don’t want to be a part of that dynamic (situation) but I have a genuine connection with him. I want to focus on myself. Hermes has a beautiful, intense and dramatic personality. I always go for people that are very different. He even physically stands out with his tattoos and piercings. We are both creative people. He is very talented and I know we are going to be great friends for a very long time.”

Oct 1st: How many billions have you made? – Acapella, Daddy Freeze go back and forth on Nigeria’s achievement