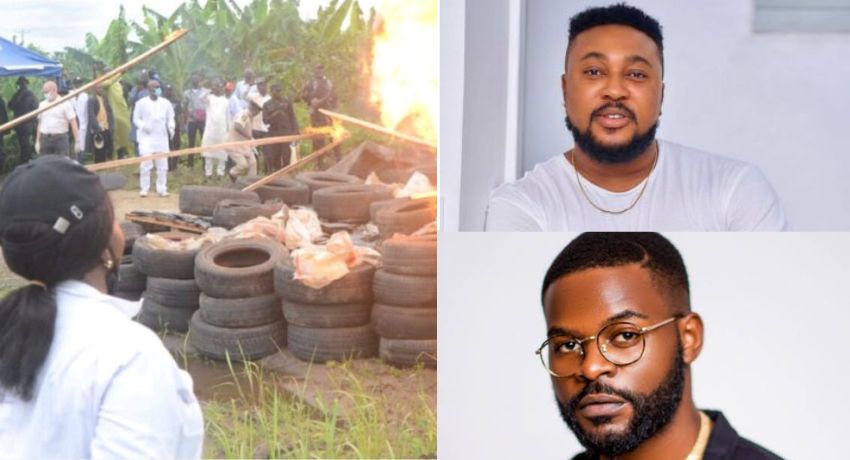 It would be recalled that last week, the agency reported a large scale drug burst carried out in a warehouse located at Ikorodu, Lagos State.

During the operation, 197 billion naira worth of cocaine, which weighed 1.8tonnes was seized, and the suspected drug barons were also arrested.

In a video shared via the agency’s Twitter page on Tuesday, NDLEA showed the seized drugs being set ablaze. The caption read:

Reacting to the news, lawyer turned rapper, Falz, faulted the agency for burning potential evidence before culprits are arraigned before a court of law. He asked:

“This administration must really think that we are daft sha!! What is this lamba (lie) that the NDLEA is giving with this cocaine seizure saga? Dem dey burn evidence?”

Actor Mustapha Sholagbade wrote: don’t believe them bro. They know what they are doing

Paul Mogbolo wrote: “I don’t believe anything was burnt.”

officiallychidi wrote: I don’t know why I don’t believe this

baddestdjtimmy wrote: So what evidence will you present in court? The ones you have burnt?

alsheditor wrote: I know am not the only one thinking they didn’t burn the actual cocaine. If not, evervbody for don high

jagabanyoutube wrote: Who supervise the processing. It’s so sad that since they captured them, NDLEA didn’t parade or question those that was apprehended on the site. Who is their BOSS? Who do they work for ? You think N194B worth of coke belongs to those ppl that look unkept in the picture that went viral. NDLEA is disguising and playing games. They have literally return the coke to the owner cos the whole movie was actually scripted. You don’t close a big case so soon just like that in a sane country.